Statue of Belief | स्टैच्यू ऑफ बिलीफ | Nathdwara Rajasthan: Vishwa Swaroopam… This is the tallest statue of Lord Shiva in the world. Height 369 feet. When you pass through the Udaipur-Rajasamand highway, you will see Lord Shiva in a happy posture.

Its launch event is starting from October 29. It will begin with Moraribapu’s Ramakatha. CM Ashok Gehlot will also be present there these days. Many ministers and celebrities including CMs of 7 to 8 states will participate in this 9-day event.

By now you must have seen the outside of the statue, but Bhaskar is showing its interior for the first time. The beauty of this statue seen from outside is that 10 thousand people can come together in the hall built inside it, that is, a village or a town can live in this statue.

Take a look inside the idol of Lord Shiva

First read, What is Vishwa Swaroopam Murthy
It took 10 years to build the Vishwa Swaroopam statue. More than 50 thousand people made this statue. The place in which it is built is called Padam Upavan. You can spend 7 to 8 hours comfortably whenever you visit here.

The statue is so huge that it will take at least 4 hours to see it in its entirety. The statue is made in the Ganesh hill area of ​​Nathdwara in Rajasamand. When you go to Ganesh hill from Nathdwara, you can see the statue just before 2 kms. This statue has been prepared by Naresh Kumawat of Gurgaon.

Now take a look inside the statue
The Bhaskar team reached inside the statue along with the team involved in the construction of the statue. There was a large hall, called the lift lobby. Seating arrangements are also available. From here the journey to walk in this statue begins.

There are 4 lifts inside the statue to go to different heights. Visitors will be offered a ride from a height of 20 feet to 351 feet.

First travel to a height of 270 feet
We were first taken by the elevator to a height of 270 feet. Lord Shiva’s left shoulder is at this height. From here the entire Nathdwara is visible. From this shoulder you can see Lord Shiva’s trident. When we were shooting the video, the wind was blowing so high that it was difficult to keep our hands steady. 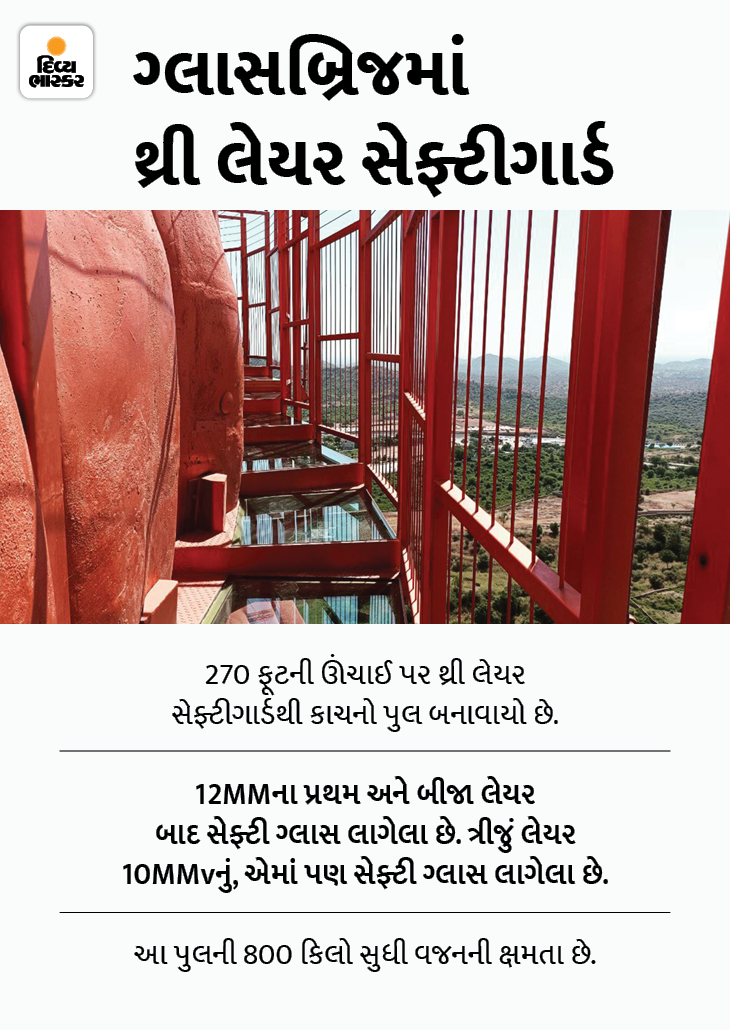 A bridge of glass, where the breath stops
A small bridge has been constructed to reach a height of 270 to 280 feet. Its biggest feature is that this bridge is not made of stone or RCC, but of glass. It took us about 10 minutes to cross the 21 stairs. The view of the ground floor from the glass stairs was a sight to behold. 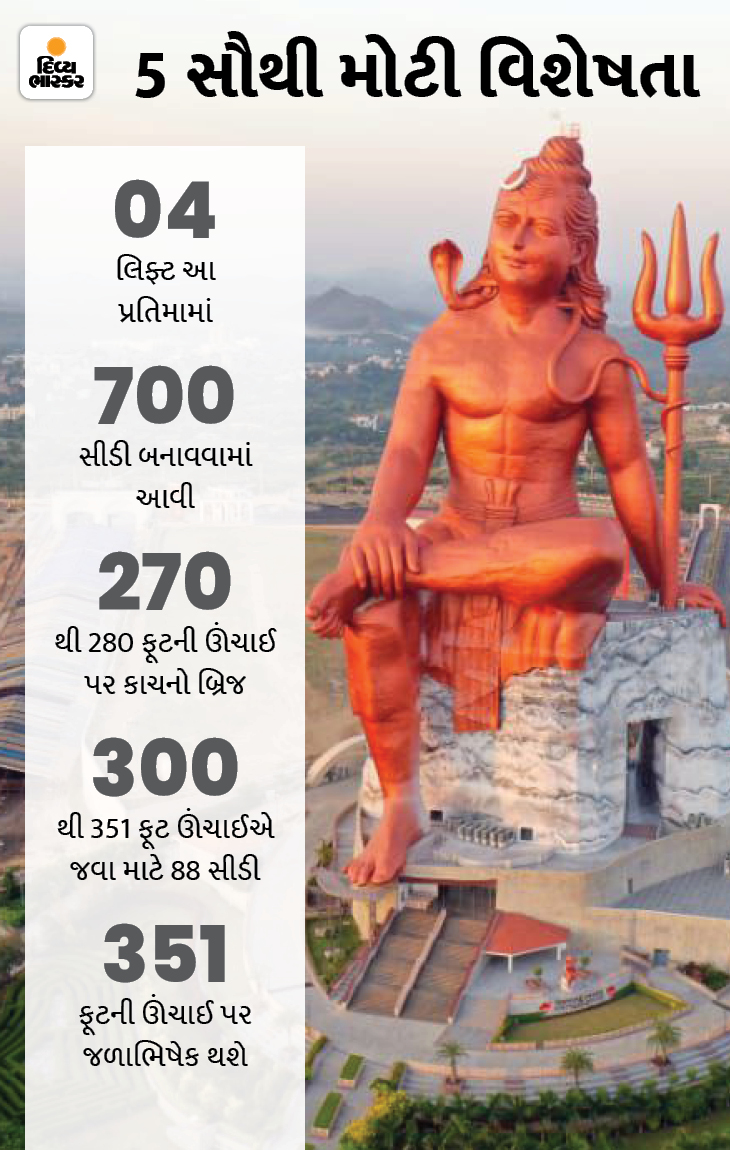 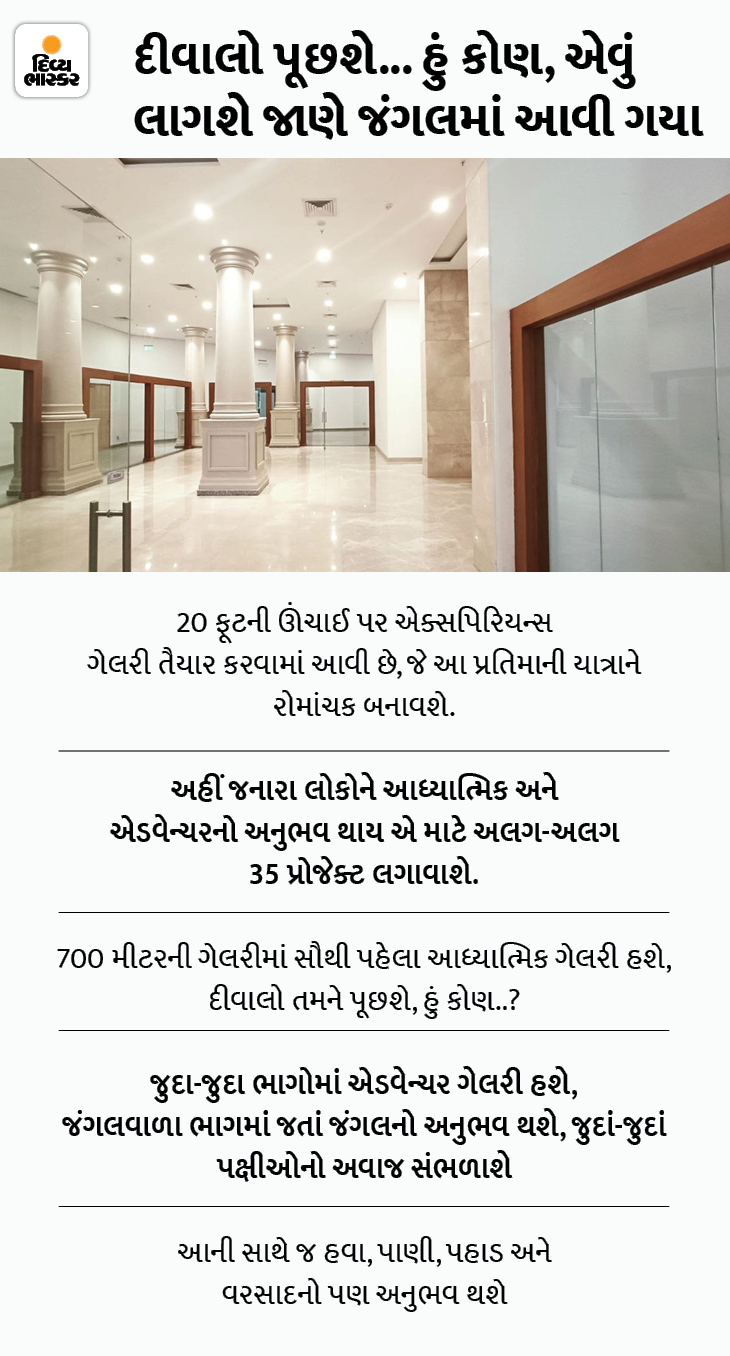 A gallery will be built at 20 feet
It took about 3 hours to see the statue at three different heights. Reaching a height of 20 feet, the Experience Gallery was in progress here. Was told it would take some time. To make this part of the statue more exciting, projectors will be installed. 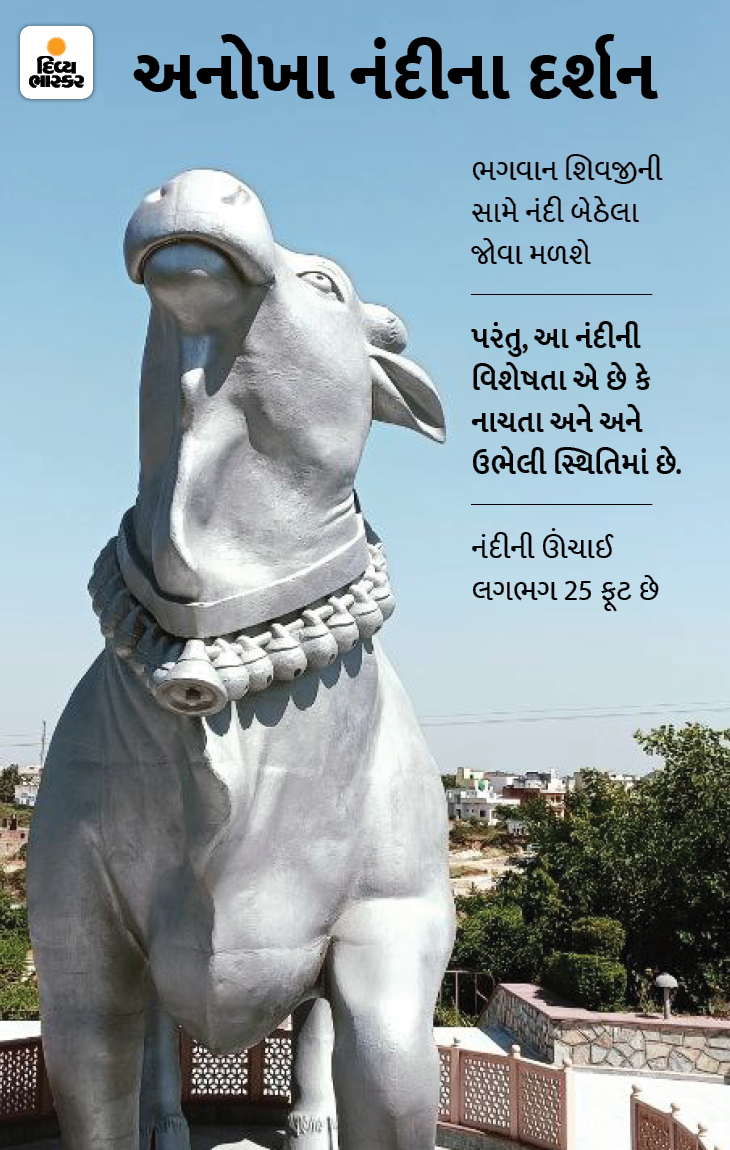 There is also a myth
It is said about this statue that when Lord Shiva came to Nathdwara to meet Srinathji, he was sitting on this hill, hence it is called Ganesh hill.
This statue depicts the joy of meeting Srinathji. It was said that Lord Shiva had left behind his Kamandala and Damru, hence the trident of Lord Shiva in this idol. Where Damru and Kamandal were left, their idols would be made separately. 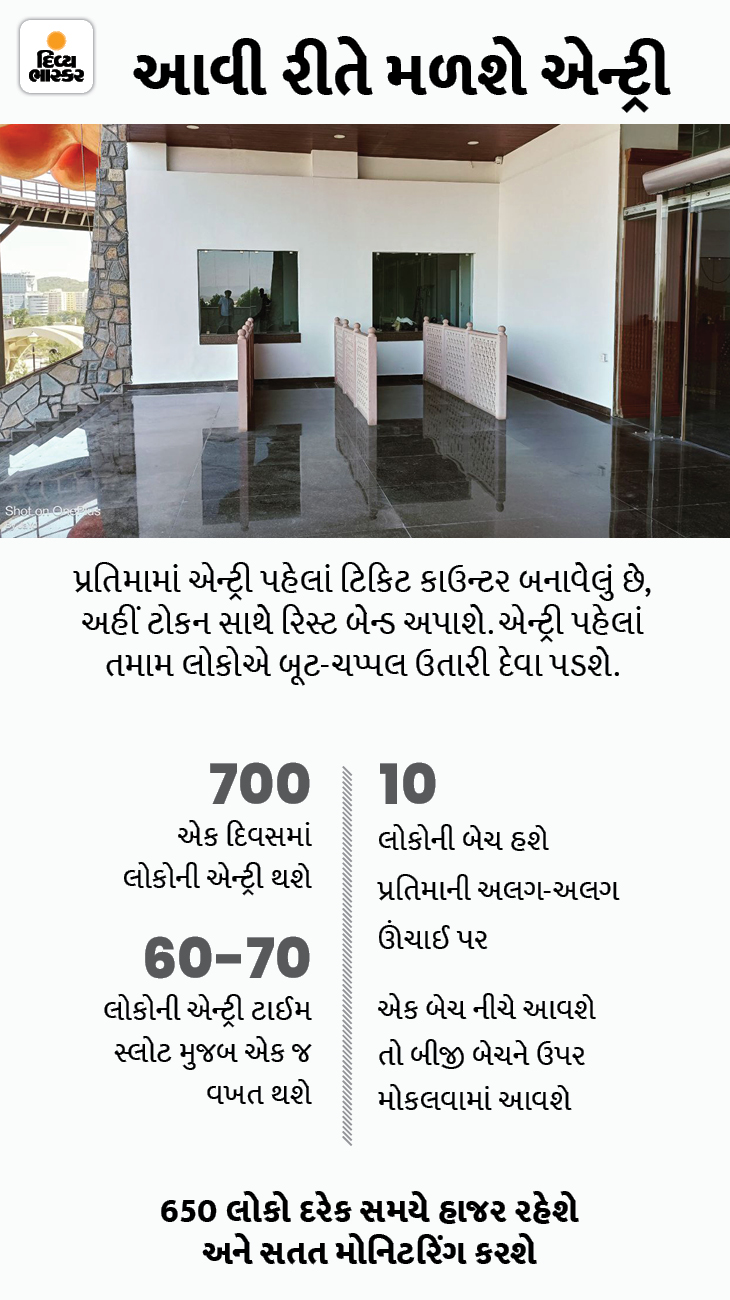 Air, water, clay and fire passed each test
The specialty of this statue is that it passed every test when its construction was started. From soil to stones and air and water were examined. This statue has passed all the tests and passed it. 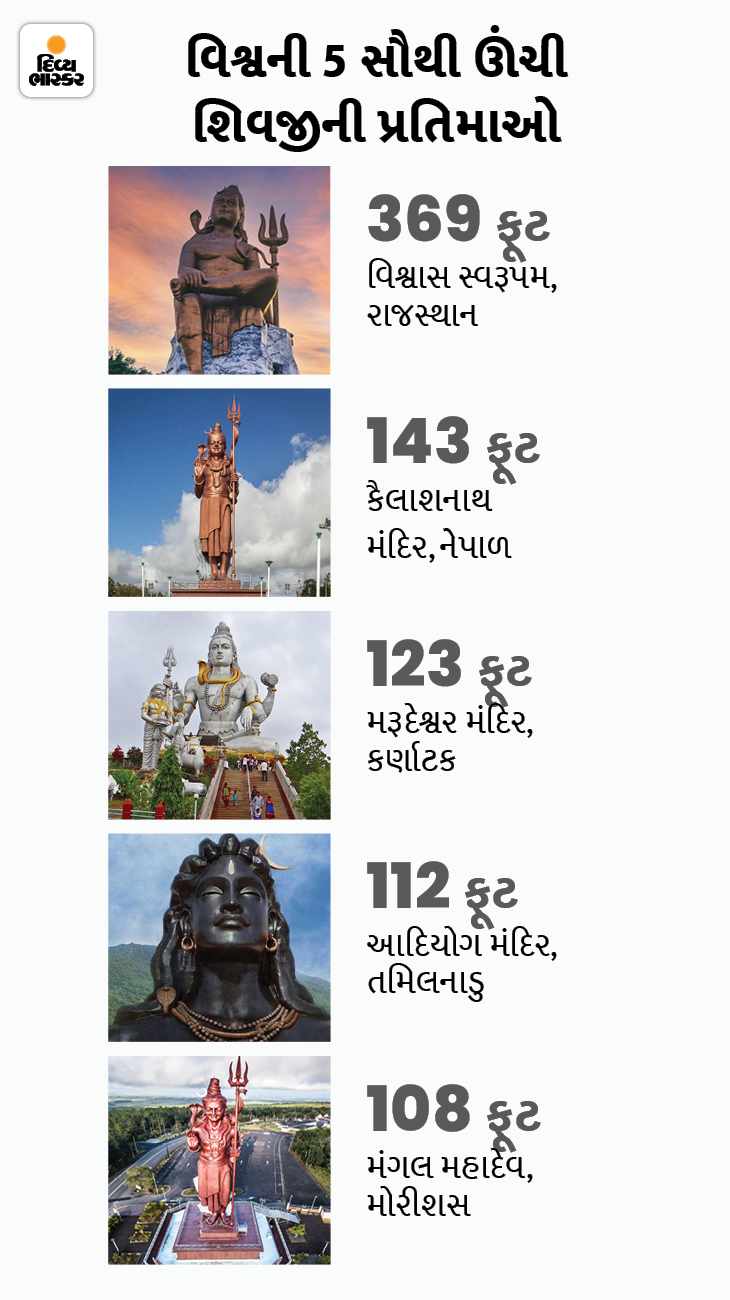 Initially the height was fixed at 251 feet
At the beginning of the construction work, it was decided to make a 251 feet tall Shiva statue, but later it was decided to increase its height to 351 feet. When the 351 feet statue was completed, the idea of placing a stream of Ganga on it came up. After this, when this aqueduct was installed on it, its height increased to 369 feet. 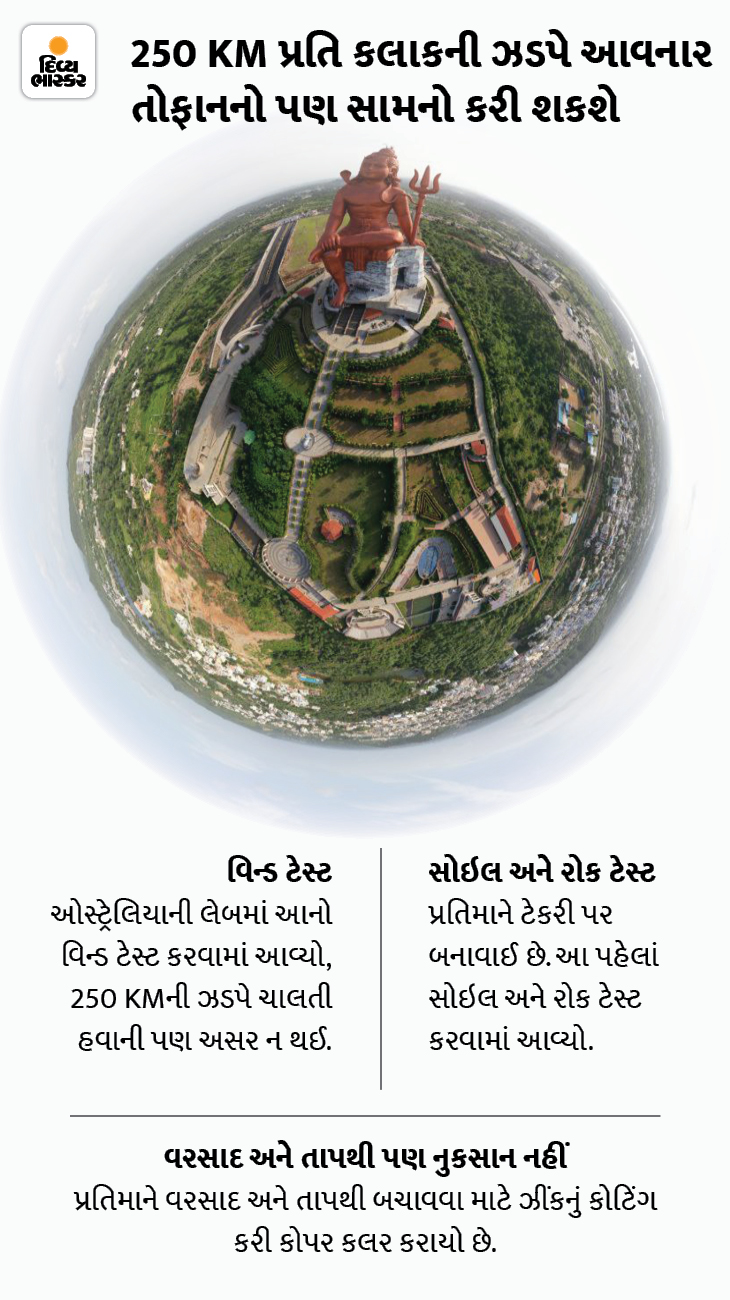 In 10 years, the work was stopped only in the lockdown
Artisans were called from all over the country to make this statue. Work on the statue has been ongoing since the foundation stone was laid in 2012. The management said that whenever there was a lockdown during Corona, the work was stopped. In the meantime, whenever the opportunity arose, the artisans would go to work and work day and night to complete the statue.